Ryan Wittenbrink scored Indiana’s first goal, and Tommy Mihalic followed shortly before the end of the first half

CARY, N.C. — Tommy Mihalic's off-balance right-footed strike adjacent to the byline narrowly tucked just inside the net, and past Pittsburgh's goalkeeper. Mihalic's arms sprang outward as the forward rushed toward the corner flag. Red-faced celebratory yells were directed at teammates.

The orange-colored font on the scoreboard displayed Indiana's two-goal lead. At the final whistle, that same 2-0 score held to send Indiana to the College Cup final. With the victory, Indiana is the first D-I men's soccer program to reach 100 NCAA Tournament wins.

Only 17 seconds remained in the first half at the time of Mihalic's goal, serving as the early plunge of the dagger.

"It felt good to have a 2-0 lead that's for sure," Indiana head coach Todd Yeagley said post-match. "Because you always felt Pitt, they have the special players that can make plays. People talk about it being a dangerous lead. I'll take a 2-0 lead anytime."

50 seasons. 22 College Cups. And now, 17 National Championship appearances for #iums after a 2-0 win over Pitt Friday night.
90 in 90 for @TheHoosierNet pic.twitter.com/5b07fiuf4A

Harms recorded three saves, the latest occurring around the 75-minute mark, as the keeper ranged to his left to stop a dangerous header attempt.

"JT has been awesome," Indiana forward Ryan Wittenbrink said. "He stepped up to the plate, as you guys can see, making unbelievable saves. So yeah, our whole team has all the confidence in him, and our backline is playing really solid."

Wittenbrink opened the scoring of the match, and notched his team-leading 10th goal of the season around the 13-minute mark. Indiana primarily operated from the flanks to begin the contest. Wittenbrink drove down the sideline, and though his shot was saved, fellow forward Herbert Endeley was fouled in the box on the rebound attempt, and was awarded the penalty.

Endeley possesses a history with Pittsburgh. Friday night marked the third-ever meeting between the two programs, all within the past four seasons. In the first meeting, Endeley secured the double-overtime golden goal in the team’s 2019 regular season opener. During the 2020-21 College Cup semifinals, Endeley scored the lone goal to advance over Pittsburgh. And Friday night, Endeley’s actions helped lead to Wittenbrink's goal.

"We all know what Herb can do," Mihalic said. "Any game can pull up a special moment. It's incredible and obviously teams have to worry about him. He causes problems and it opens up the game for other guys."

Wittenbrink's penalty was saved — again — by Pittsburgh goalkeeper Joe van der Sar, yet the Indiana upperclassmen calmly scored the rebound. Wittenbrink waddled in celebration, and kicked the corner flag — replicating his actions in the second round against St. Louis.

Roughly 15 minutes after the break, Pittsburgh attacked with back-to-back chances. The first was off-target, and Harms scooped up the second. Once the Panthers’ pressure subsided, Indiana midfielder Patrick McDonald comfortably handled possession in multiple spots around the field.

On some occasions, Indiana players solo-attacked Pittsburgh's backline, a few runs resulting in shot attempts. Samuel Sarver's shot on one of these solo attempts curled just wide. Now, these weren't too dangerous, but briefly eased tension away from Harms and the backline, while running out the clock.

When the clock ran out, Sarver yelled into the heart of Indiana's fan section in the 10,000-seat venue in North Carolina. Mihalic stood perched in front of the fans, before the entire team strolled to one corner of the stadium and danced to the pep band's loud tune.

The brass-wielding musicians turned Sahlen's Stadium at WakeMed Soccer Park into a home match at Bill Armstrong Stadium in Bloomington, Indiana. But Harms understands what this victory means for fans who couldn't attend Friday.

"This result isn't just for the 11 on the field," Harms said. "It's for everybody involved with the program. We got a lot (of) people watching from home who'd love to be here and to have this moment for them, it's special. But the job's not done and we're looking forward to getting back on the pitch Monday night and hopefully get the ninth star."

No. 13-seeded Indiana plays No. 3-seeded Syracuse at 6 p.m. in the championship match Monday. It will mark Indiana’s 17th national title appearance. 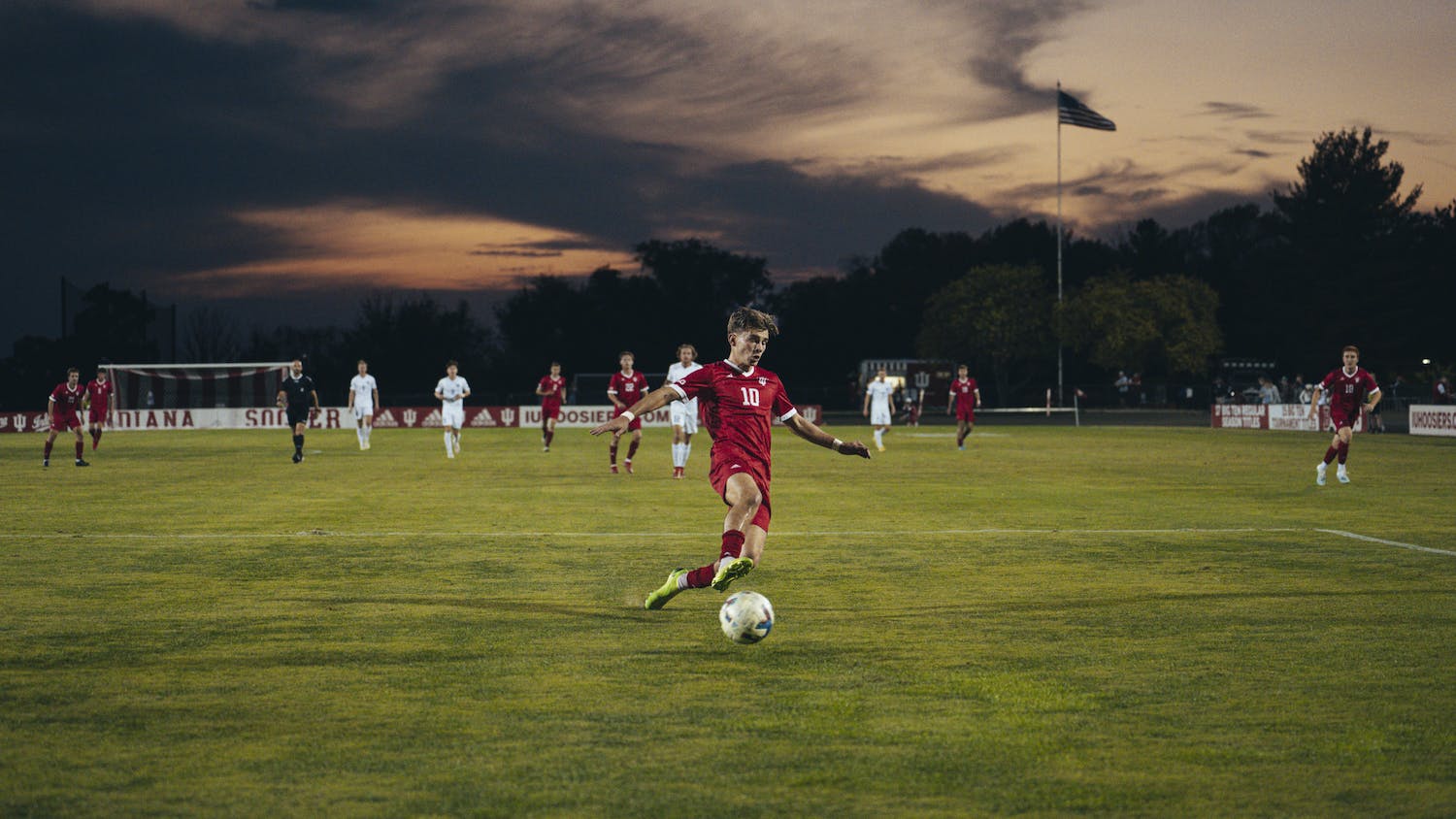