With two consecutive losing seasons under its belt, Indiana football has turned to the offseason. For the team, that means potentially restructuring the offense, gearing it toward a mobile quarterback such as junior Dexter Williams II.

For many of its players, however, the offseason means leaving Indiana and finding somewhere new to play. The transfer portal opened Dec. 5, allowing players to enter their names as potential transfers without needing to sit out for a season. Per NCAA regulations, the current window to enter the portal closes on Jan. 18, 2023.

Many of the names filed in after the end of Indiana’s season, either declaring for the 2023 NFL Draft or entering the transfer portal.

The earliest was senior quarterback Jack Tuttle, who declared Oct. 17 that he would transfer after the season. Tuttle has since been joined by a plethora of Hoosiers, including two other quarterbacks and Indiana’s top defensive freshman.

The Hoosier Network will update this story regularly as players enter the portal or the draft. Years listed next to a player’s name is his eligibility this past season.

Hoosiers in the portal

Connor Bazelak, junior quarterback: Bazelak spent just a year at Indiana after transferring from Missouri and started the first nine games of the season. Against Ohio State, Bazelak was pulled after three drives for Williams and didn’t play again until the final game of the season against Purdue after Williams sustained a knee injury. Bazelak was 235-for-426 with 2,312 yards, 13 touchdowns and 10 interceptions on the year. His transfer announcement came with little surprise as Indiana looks to move away from pocket passer quarterbacks next year.

Jack Tuttle, senior quarterback: With five games left in the season, Tuttle announced he would enter the portal at the end of the year as a graduate transfer. The team captain did remain as the team’s QB No. 2 behind Bazelak, thanks to head coach Tom Allen’s trust in him. When Bazelak missed a game with an injury, Tuttle stepped in to complete 9 of 12 passes for 82 yards and a touchdown against Penn State before sustaining an injury. The former Utah quarterback finished his four-year Indiana career with 901 yards, five touchdowns and six interceptions, largely in a backup role. UPDATE: Committed to Michigan.

Grant Gremel, junior quarterback: The third of three quarterbacks in the portal, Gremel’s story was a highlight of Indiana’s dim 2021 season. The walk-on quarterback from Noblesville, Indiana, was the fourth to play in a game for the Hoosiers and earned a starting role against Purdue in the season finale. On the season, Gremel was 32-for-58 for 269 yards, one touchdown and an interception.

Dasan McCullough, freshman outside linebacker: McCullough’s impact on the defense as a freshman was immediate and obvious. He was seventh on the team with 49 tackles and tied for first with four sacks, and his departure may hit Indiana the hardest. The program’s highest ever-rated recruit was the No. 4 ranked transfer when the portal opened Monday, according to Rivals’ transfer tracker. UPDATE: Committed to Oklahoma.

AJ Barner, junior tight end: Barner was one of Indiana’s biggest — literally — receiving threats last season, hauling in 28 catches for 199 yards and three touchdowns. While his total yards were seventh-best on the team, he was a red zone target for Indiana — his three touchdowns were second on the team. The 6-foot-6, 252-pound tight end also had 162 yards receiving in 2021 playing as the backup to current Dallas Cowboy Peyton Hendershot. UPDATE: Committed to Michigan.

Charles Campbell, senior kicker: Campbell will leave Indiana with his name plastered in the record books: he’s No. 8 with 37 career made field goals, No. 9 with 68 career extra points and his second all-time with five makes over 50 yards. However, Campbell’s productivity has dipped each year while at Indiana. He went from a 91% field goal percentage in 2020 to 70% last season, although he did set a career-high with 69 points. Campbell’s long is 55 yards and he has not missed an extra point attempt. UPDATE: Committed to Tennessee.

Christopher Keys, sophomore cornerback: Keys played in 10 games last year and started twice, including his first career start against Michigan on Oct. 18. He had 15 tackles and allowed 10 receptions on 18 targets with one pass breakup. With the departure of key members of the secondary to the NFL Draft, Keys had the opportunity to play more for Indiana but will instead transfer.

Javon Swinton, junior wide receiver: Swinton enters the portal after having 12 catches for 122 yards in 2022. His most memorable moments with the Hoosiers will be his two catches in his first career game against Penn State in 2020. The grabs came on the final drive of regulation and helped set Indiana up for the game-tying touchdown.

Malachi Holt-Bennett, sophomore wide receiver: While Holt-Bennett’s statline last season was spotty, with catches in just four of 11 games, he had a small breakout performance against Purdue to close the year. He grabbed half of his six total catches and 50 of his 90 total yards in just that game. A high-rated recruit in the 2021 class, he was projected to take a larger role in Indiana’s offense next year, but will instead play a part in a different program. UPDATE: Committed to the University of Alabama at Birmingham.

Lemuel Watley-Neely, sophomore cornerback: Watley-Neely played in 10 games in 2022 and recorded nine tackles. He was the sixth-highest recruit in the 2020 class, the same class as Keys, and has appeared in limited time at Indiana.

Randy Holtz, sophomore offensive lineman: Holtz saw limited action for Indiana almost exclusively on special teams. Another member of the 2020 class, Holtz’s departure accentuates the lack of depth on an offensive line that was already bad in 2022.

Richard Thomas, Jr., freshman defensive lineman: Thomas, the No. 8 recruit in Indiana’s record 2022 recruiting class, announced he entered the portal on Dec. 5. He did not appear in a game in 2022.

Josh Sanguinetti, junior defensive back: No position has taken as big of a hit this offseason as Indiana’s defensive backs group. Sanguinetti is the eighth Hoosier to announce his intention to leave the program, either by transferring or by entering the draft. Sanguinetti made 22 tackles in nine games and would’ve returned to Indiana as one of the most experienced members of the secondary.

Charlie Spegal, sophomore running back: The former Indiana Mr. Football got his only work at running back in 2021, where he rushed for 62 yards on 19 carries. The walk-on from New Palestine, Indiana, played on special teams in 2022.

Hoosiers in the draft

The list of Indiana’s players who have entered the draft is not exhaustive, but will include some of the biggest names for Indiana.

Tiawan Mullen, senior cornerback: Despite having another year of eligibility, Mullen announced his decision to enter the 2023 NFL Draft on Dec. 7. Mullen leaves Indiana as one of the most respected Hoosiers over recent years. Over four seasons, he played in 40 games and registered 144 tackles, five interceptions and four forced fumbles. In 2020, Mullen became the first Indiana cornerback to earn first-team All-America honors.

Jaylin Williams, senior defensive back: Indiana’s active leader in career interceptions with six, Williams declared for the draft on Nov. 29. Williams recorded 152 tackles and six and a half sacks. Williams struggled in 2022, allowing five touchdowns but registering five pass breakups.

Devon Matthews, senior defensive back: Over five seasons and 52 games, Matthews registered 217 tackles and four interceptions. Matthews was Indiana’s highest-rated defender in coverage, according to Pro Football Focus, and had two pass breakups and an interception. Matthews was part of the senior defensive back tandem including Williams and Mullen who helped lead the team to two bowl games.

D.J. Matthews Jr., graduate student wide receiver: Matthews’ career with the Hoosiers was largely hampered by injuries in both 2021 and 2022. After transferring from Florida State, Matthews caught 36 passes for 389 yards and two touchdowns. His biggest game came against Cincinnati last season, where he had 120 receiving yards and 28 rushing yards and a rushing touchdown. He also made an impact as a punt returner: Matthews, Florida State’s career return-yards leader, scored a touchdown on a punt return against Idaho in 2021.

Shaun Shivers, senior running back: After transferring from Auburn prior to the 2022 season, Shivers received a boost in touches and turned in career-highs in yards, touchdowns and receptions. As Indiana’s main running back, Shivers had 143 carries for 592 yards, and caught 22 passes for 128 yards. He also added six rushing touchdowns and a receiving touchdown. 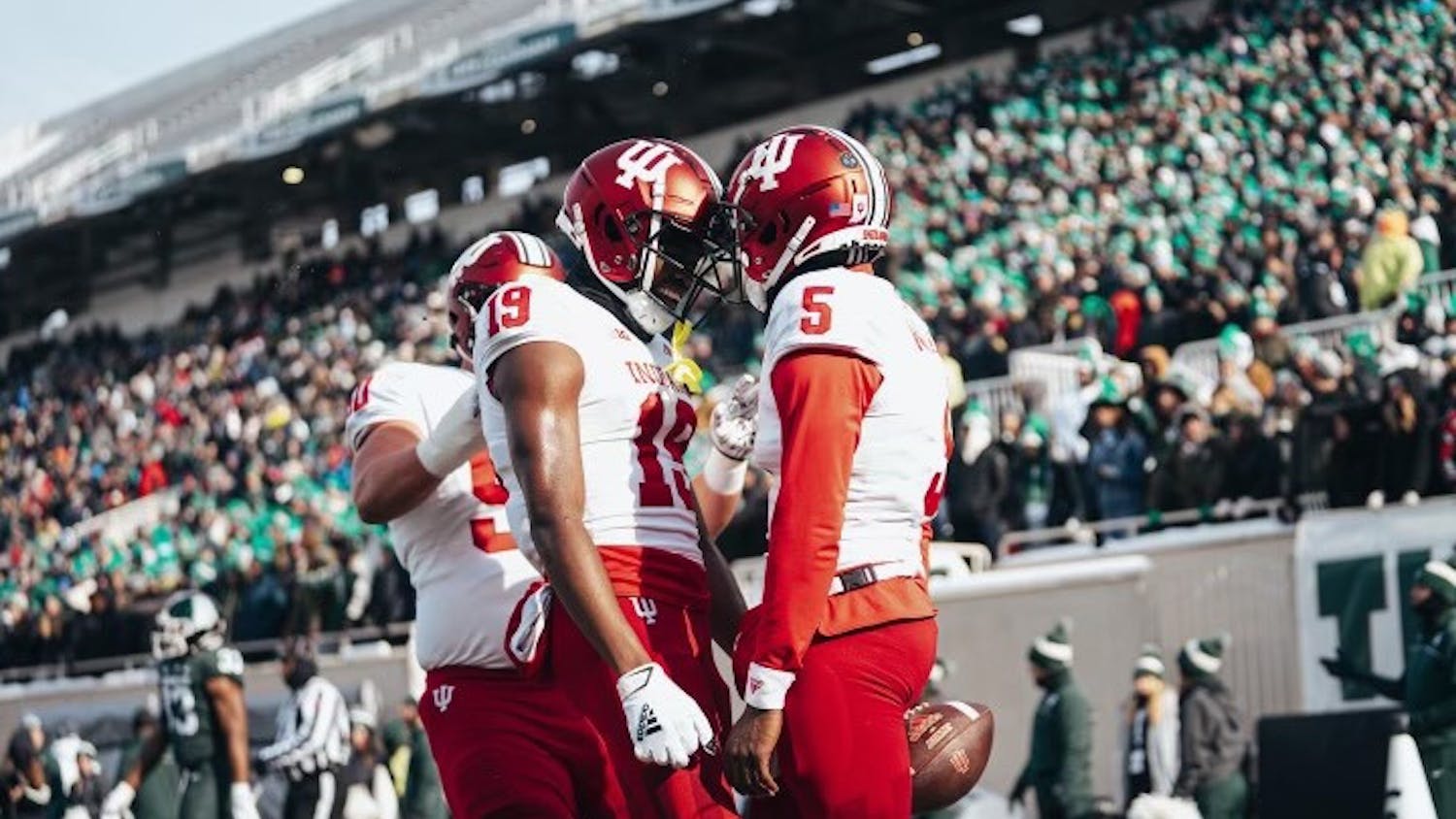 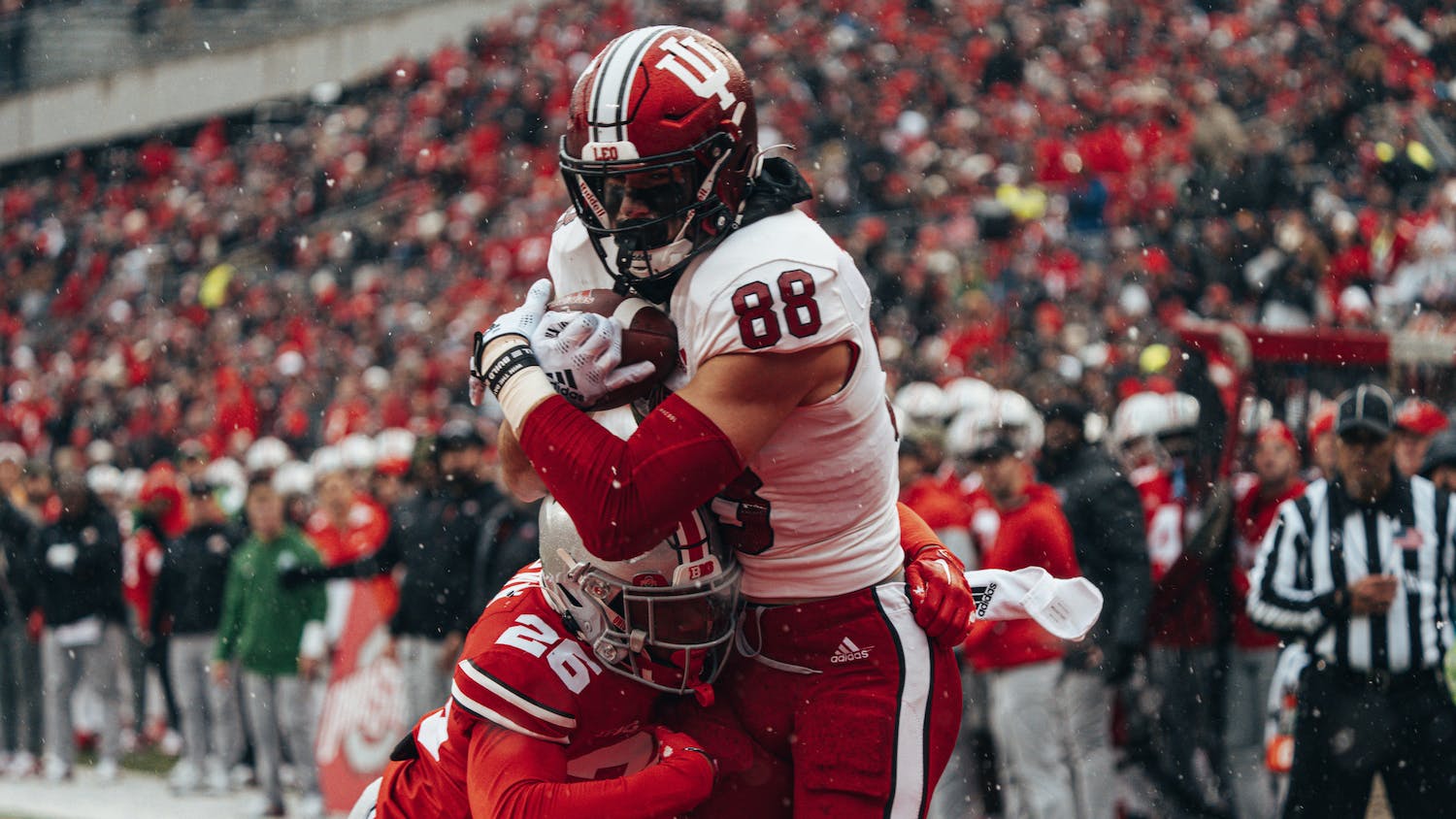